The last time I wrote a blog I was talking about my winter training and my plans for the 2020 race season, since then it's fair to say A LOT has changed. It does feel like a lifetime ago I was packing up my stuff from University and driving home unsure whether I will be back before September.

Three months on from the start of lockdown it's pretty clear there won't be much of a race season. However, despite no races I feel I have really reflected on why I decided to ride a bike. I've started to get that enjoyment and appreciation of being able to get out cycling that I seemed to have lost a few months before. I feel that if the whole pandemic hadn't occurred perhaps I would have gone into the race season not very confident and enthusiastic. Although what has happened is awful, it's definitely allowed me to take a few steps back and understand why I ride a bike. It's made me motivated and enjoy cycling more than ever as It's one of the very few things we have been able to do throughout this pandemic. I think the only racing we might get this year are some TTs, and I have been very lucky to be provided with a TT bike from Loughborough this year, so I will be starting some TT preparation soon in hope that some local events go ahead.

It's also been nice to be back at home with my family riding round roads I am much more familiar with, and are a whole lot more scenic and quieter. It's definitely been a challenge being in lockdown in a family of six, my parents are still working and my siblings are doing school work, so in a way getting on my bike has also been a escapism from the chaos at home. My family have been very supportive with training and seeing my brother getting out has definitely motivated me to continue training.

It has been a challenge being away from friends, racing and other stuff I would have been doing. I have found myself looking back on memories of last summer and earlier on the year, but I know my situation could be a whole lot worse. I would like to thank Pedal Potential, Loughborough performance and Jadan for their continued support throughout the pandemic, and I'm looking forward to it being over and racing returning.

Thanks for reading,
stay alert ;)
Liv

It's getting to that time of year where it never seems to stop raining, the wind is relentless and all you want is some sunshine.....

Since moving to the Midlands in October my experience of winter cycling conditions have been nowhere near as bad as previous winters in the North. It is however, still a tough time of year to get through my schedule of training. Becoming a student at Loughborough University has provided access to plenty of group rides, the opportunity to ride new roads and establish new cycling friendships. This has made my recent cycling journey a whole lot more interesting.

I now have more hours available to train on the road compared to previous years and I have had lots of guidance within the gym which has really made a difference on the bike. Admittedly I have been enjoying going out and living a bit of the student life but I feel it's good to have a balance to take your mind off training every now and again. Living in halls and general University life has taken it's toll. I have suffered with illness on and off, but I guess It's just one of those things you have to just get through in first year!

With the 2020 race season now lurking round the corner, I now need to finalise my race calendar. Although officially the National road series dates have not been announced, I do have an idea of what the season will look like. My main focus will be the National road series where I aim to better my results from last season and I have one race in the Netherlands confirmed in April. I will also be competing in BUCS cycling events. I've been fortunate enough to be provided with a TT bike this year from the University so I'm looking forward to getting stuck into some TTs now I have a proper bike, although admittedly I am yet to look into TT events this season...….

I am very grateful for the support Pedal Potential, Loughborough performance squad and Team Jadan cyclespace are providing this year. With the race season less than a month away, I'm looking forward to getting back into competing.

Reflection on my 2019 season and new beginnings

Overall I would say the 2019 season was a successful one, on and off the bike.
There is no denying 2019 has been the most difficult year of my life, but it has also been most successful. Racing and trying to pull off some decent A levels at the same time is tough, but it seems to have gone past in a blur.

I started off the season in March with some respectable results regionally. I was very lucky to have the opportunity to race two Nations cups, with Storey racing and Liv awol at Healthy ageing tour and Omloop Van Borsele. All I can say is that I won't be in a rush to race in the snow in Holland with 140 girls crashing left, right and centre. It was a great experience nevertheless, but it certainly wasn't for me.

Around the end of April I had a break from racing to focus on my exams, I returned back to racing at Ilkley criterium, which was very a much a shock to my legs. That weekend I had tour of Reservoir, which is almost certainly one of the toughest women's Nationals of the year. I wasn't feeling too optimistic after Ilkley 4 days before, however it was one of my strongest races of the year, finishing 20th overall.

For the rest of the season I picked up my first top 10 and 20s in women's Nationals, which I was very happy with as I really wasn't expecting much this season. I then finished my season with 18th overall at the women's Ras na mBan, and my last race was Watersley ladies challenge Nations cup. By this point I had pretty much cracked, I just about managed to get round. I was a little disappointed with the quality/lack of junior National women's races, but unfortunately the junior girls numbers seemed to really lack this year.

A few weeks after my last race I started Loughborough University. At the start of the year I thought I wanted to take a gap year to race abroad, but after my experience of  Nations cups I decided it wasn't the right thing for me. I've been really enjoying a fresh start here, and the support and facilities available at Loughborough are amazing. I'm really excited for a new start on their programme racing both track and road next season.

I would also like to say a huge thank you to Vic and Scott from Team Jadan Weldtite for all their hard work to support the team all season, it wouldn’t have been possible without them.

Thanks for reading,
Liv

The last time I wrote a blog I was talking about my winter training and my plans for the 2020 race season, since then it's fair to say A... 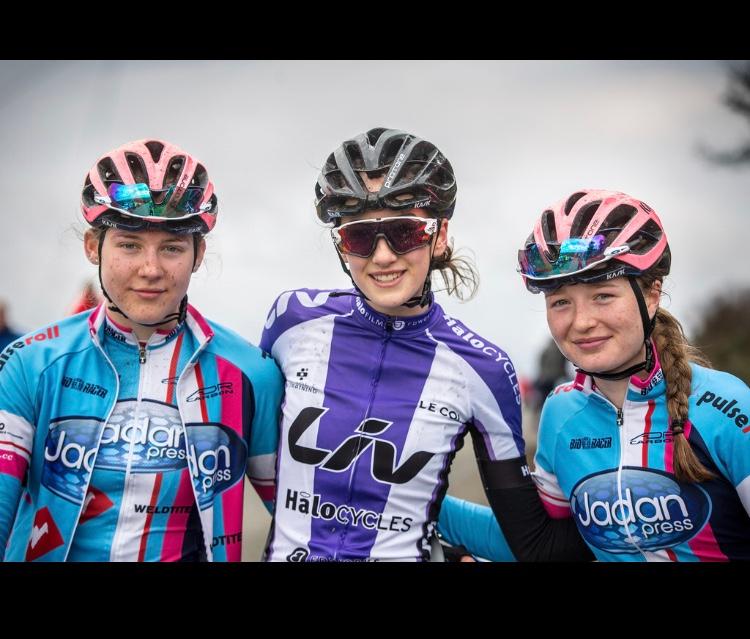